Anger has been expressed over plans to build dozens of homes on a green space in the middle of a Sutton Coldfield road.

Proposals from Birmingham City Council to build 28 two-bedroomed bungalows on a grassy area in the middle of Dugdale Crescent in Mere Green have been slammed by residents and a councillor.

A Dugdale Crescent Public Open Space Public Consultation and Questionnaire states: “Birmingham City Council wants to receive the views of local residents regarding a proposal for a housing development on part of the Dugdale Crescent site.”

Andrew Hood, housing development manager for the city council said: “There is a growing older population in the city and many older people are living in family homes which are too big for them.

“We believe that this will complement the local community and local area.”

Two-bedroomed bungalows for ‘elderly people’ are in ‘very short supply’ the proposal states. The plan is for the development to take up a third of the green space.

The council also states the development will ‘provide opportunities for training, work placements and apprenticeships’.

Mum-of-two and Dugdale Crescent resident, Sophie Thompson, said: “We are absolutely horrified. We are incensed!

“They want to put a road right through the crescent, with cars going directly at my house!

“There are a lot of residents on Dugdale Crescent that have been there for an awful long time. There is a mix – from families to elderly people. Every single person I have spoken to is mortified at the thought of homes going there.

“We hope what we can say and do will change their minds.”

The letting agent said it was the ‘wrong location’.

Sophie said: “I have drawn up a four-page email on why this should not go ahead.

“If this went ahead half the residents on the crescent wouldn’t be able to see the green.

“Children from Pudsey Drive and Duncalfe Drive – two cul-de-sacs off the crescent – play there. People are able to look out of their front door now – but they wouldn’t be able to see them!

“My children are five and 14 and my son, Nathan, plays football there all the time in the summer. I would hope my daughter Lydia would be able to play there next summer. And I could watch her – but with extra cars there would be disruption.

“There will be extra traffic – from the residents, and if it’s for elderly people – from health visitors and others.

“The proposed 28 homes only have provision for one car parking space each. The residents know – almost like an unwritten rule, to park around the side of the crescent where the pavement is. But if the homes are built and there are homes both sides it will be congested.”

“The fact the air ambulance land on there regularly – it’s been at least three times in the last 12 months, she said. “A little boy recently fell on his bike and the handle bars went through his chest wall. He’d be dead if it wasn’t for the air ambulance.

“Where would they land?

“There’s flooding in the street now. Take away a third of the soakaway, where’s the water going to go?

“We are looking in to the possibility that there may be a covenant from William Dugdale when the land was given to Warwickshire saying that the land cannot be built on. 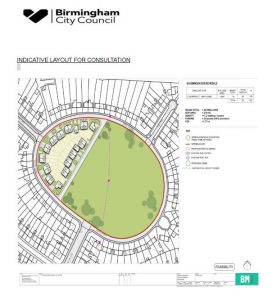 “The land was then passed to Birmingham. We have contacted the Dugdale family.

“We are also looking potentially to apply for village green status.

“And there’s a community spirit here. When the council didn’t mow a third of the grass to save money but our chaps mowed the lawn. They look after it. Everybody looks after it. People carry extra bags to pick up dog mess.

“They are literally planning on building a wall through our community.

“I thought I had found my forever home. Maybe I haven’t.”